Have a look at our team

Mikkeline is a student of Rhetoric at the University of Copenhagen. At Nextwork she is putting her education into practice alongside pursuing her academic degree.

Her work of preference is hands-on consultancy on lucid internal and external communication. Assisting clients and colleagues alike, her professional tenet is to make rhetorical tools workable and outputs trenchant. Mikkeline values the work of becoming familiar with the specific and complex situation of a client, including their stakeholder environment and communicative touchpoints.

Setting great store by the combination of theory and practice, Mikkeline already has years of experience from the Danish Agriculture and Food Council and the public affairs team of a major Copenhagen agency. 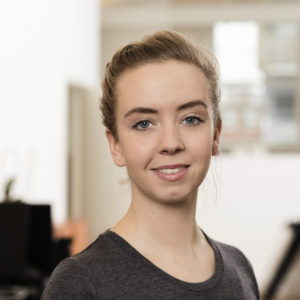 Nextwork recommendations for policy on disinformation, as presented to the European Parliament

Thomas Albrechtsen will be a contributor and speaker at a conference called "Countering Disinformation: Democratic accountability and algorithmic transparency" hosted by the International Republican Institute. Apart from giving a presentation, Thomas will be handing over a list of recommendations for potential legislation within this policy area. By now, Nextwork has build a pool of knowledge and understanding within the field of disinformation, and for this specific cause we have gathered our key points on how best to uncover and handle future influence campaigns. There are three main points to our list of recommendations: Social media platforms have to work with authorities and civil society actors to unveil disinformation by sharing more data Social media have to be transparent as regards how they practice censorship, how their algorithmic recommendation feeds of suggested content work, and what adds are run on their platform Policy makers should be given fundamental training in the data-flows of social media, and the potential risks and pitfalls during an election Our recommendations can be accessed in their full length here: Countering Disinformation

Thomas Albrechtsen invited to join the SIRI Commission, as it investigates how to strengthen the digital immune defense of the democracy

As the monopoly of truth is abolished, public belief and opinion becomes volatile. Multiple human as well as AI actors are competing to obtain influence. How do we best equip politicians, people and press to handle and regulate the flow and quality of information in a digital age? Nextwork CEO, Thomas Albrechtsen, has been invited to join an expert group under the Danish SIRI Commission by virtue of his work with disinformation and democracy in a digital age. In the months ahead, Thomas will be working with the commission to develop a range of recommendations on how to handle the digital disruption of information and news. About the SIRI Commission The SIRI Commission is a think tank founded by Danish politician Ida Auken and the Danish Society of Engineers. The commission works to map out the changes, challenges, and potentials of artificial intelligence and digital disruption in a broad sense. The commission addresses multiple secondary themes one after the other, and sets up a working group of experts for each theme. Thus far, the commission has dealt with the themes transportation, health and fintech. The next theme of the commission is called “AI, media and democracy”. The permanent members of...

Could Russian interference impact the next Danish election?

At Nextwork we advise a diverse group of clients on how to navigate and utilize a rapidly changing and increasingly digital media universe. Denmark as a democratic state will be facing a major digital challenge, as the next general election approaches: How can we make sure, that the election is determined by the Danish voters, without interference by foreign agents? Over the past few years, we have seen multiple examples of foreign states trying to influence national elections using adds, fake news websites, internet bots and trolls etc. At this year’s People's Political Festival (Folkemøde) at Bornholm, Nextwork and Analyse & Tal have invited representatives from Google, Facebook, The European Political Strategy Center, and the Danish media industry to debate the magnitude of the issue, and what protective measures are being taken in order to sustain our digital democracy. We will be investigating previous cases, as well as the the risks and responsibilities regarding foreign political interference with the next Danish election. Host: Thomas Albrechtsen, CEO, Nextwork The event will take place on June 15th at 14:30, at the stage named "Det Akademiske Kvarter", zone F14, Allinge, Bornholm. Read more, and sign up for the event through Facebook (Danish): https://www.facebook.com/events/207644883364849/

Nextwork CEO Thomas Albrechtsen and partner of Analyse & Tal Tobias Bornakke challenge the general perception of public digital data in a new article published by Danish newspaper Dagbladet Information. The two authors argue, that we ought to consider a more solidary approach to the concept of sharing data. The social turn in the perception of public data is simple: all major agents should contribute to the pool of public data, in order to minimize monopolization and support research, transparency and democratic development. When it comes to data, everyone seems to worry exclusively about their individual right not to be measured, tracked, filed, and observed. While this concern is honest and understandable, our fear of being monitored has so far led us to allow for further monopolization of the data collected by tech giants such as Facebook and Google. This, along with our resistance towards collection and pooling of public data by other organizations, will greatly weaken research within medicine, social science, infrastructure, communication, and language. Can we justify our aversion against public data, when the scientific development and understanding of our social interactions and communities are suffering? Does it make us feel more safe, that the global pool of digital...

At Nextwork we have a knack for spotting talent. Last fall, we were pleased to appoint Lasse Perrild as the first Head of Digital at Nextwork. It has long been obvious to us, that Lasse holds a unique talent for understanding the political agendas of the digital age, and providing useful, forward-thinking consultancy to a diverse group of clients. Now, the Danish corporate world has officially recognized this talent, in nominating Lasse as one of top 100 business talents of 2018. This year, involvement with the digital agenda has been a deciding criterion for the nomination of talents. At Nextwork we don’t hesitate in saying, that by engaging Lasse, we have gotten hold of one of the biggest digital talents, Denmark has to offer. Lasse Perrild is former Senior Press Officer to the Major of Employment and Integration in Copenhagen. At age 26 he was appointed Special Advisor to the Minister of Employment, Ida Auken, and later he also served as Special Advisor to the Minister of Taxation, Holger K. Nielsen. Moreover, he has worked as Press Coordinator and Speechwriter to the CEO of the Confederation of Danish Industry, Karsten Dybvad. Congratulations! Read the portrait following the nomination here: https://www.business.dk/oekonomi/den-digitale-spindoktor

Nextwork CEO: Authorities will have to fight for their status as conveyors of reliable information

Nextwork CEO Thomas Albrechtsen encourages authorities to contribute strategically to the available information on social, digital media platforms.    In a discussion piece published by the Danish national newspaper Politiken, Thomas Albrechtsen explains how the power to construe reality will be allotted those who understand and utilize the accessible information technology. The monopoly of truth is abolished as innumerable sources, platforms, and online communities arise. So how do we prevent secluded online communities of truth and meaning?   All indications are, that social media platforms such as Facebook and Youtube cannot be trusted to sort out falsehoods, demagoguery, hate speech, and unreliable sources. We have the necessary technology to identify the key arenas, actors, and issues of public debate. It's about time authorizes take interest in the creation of public opinion on social media, and take up their role as an active contributor to the competing narratives regarding health, environment and minorities.   Access the article: https://politiken.dk/debat/debatindlaeg/art6353231/Nettet-er-blevet-et-eldorado-for-konspirationsteoretikere-rabiate-politiske-synspunkter-og-sensations-bloggere

We are thrilled to annouce that our CEO, Thomas Albrechtsen, was chosen by Berlingske Business as one of the rising stars of the Danish Corporate world in 2017. The list includes talents who were “extensively nominated by business and other interested parties”, and is a testament to Thomas’ hard work and dedication to Nextwork. Amongst other qualities, Thomas was nominated for his humanistic approach to analyzing Big Data, which emphasizes insights that allow us to understand human nature and behavior at scale.  As noted by our director of board, Jesper Højberg: “For me, with 30 years of experience as a consultant, it is impressive to watch Thomas advise customers at a level that is totally unique for such a young person. That he at the same time is able to develop novel research methods, publish academic articles, and can call himself an author, is simply just admirable.«

Brian Due recently received the PhD award of the union Kommunikation og Sprog. The award is given every other year to “shed light on academic research with a business-relevant scope and also to reward a talented, young researcher.” We are proud to have Brian on our team! The award was given on November 14th 2016 at Carlsberg Academy. You can read more about the prize here (in Danish).

Our Head of Research and Assistant Professor at the University of Copenhagen, Ph.D. Brian Due, has spent the last year studying the future of wearables and their implication for social interaction. His paper, ”Knowledge and Epistemic Incongruences in Social Interaction with Google Glass” will be presentet at the Fifth Meeting of the Language and Social Interaction Working Group (LANSI) at Columbia University on the 16th of October. The paper deals with a participant’s use of Google Glass in social interaction with regard to object-orientation and identity; how the use of Google Glass is a private experience, which produces epistemic incongruence; and how Google Glass is a non-human participant, who occupies slots in the sequential unfolding of turns.